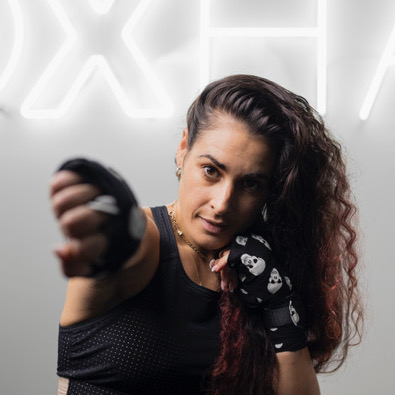 ABOUT:  Ashley has been in the fitness industry for over 10 years. Ashley Guarrasi is a Nike Trainer specializing in Functional Movement & Boxing Fitness. She is currently based in Orange County, CA while she splits time between LA and NYC. Ashley previously worked for Rumble Boxing in New York City as a Founding Trainer & Creative Director.

Formerly, she had an established residency at the Equinox West Hollywood gym training celebrity clientele. Over the past ten years she carved a niche for herself within the boxing fitness community. Ashley has competed in An Amateur Boxing fight For charity; led Nike Team Training Events and has worked with hospitality companies on fitness retreats/ events around the country. She has also worked with non-profit organizations such as; The Ruby Project *which helps support young women and teens who have survived abuse and trauma* as well as the House of Ruth in Los Angeles. She has also been featured in national commercials and worldwide campaigns for both major sports + fitness brands & tech companies such as; Apple. Inc., Nike Inc. & Beats By Dre. Ashley’s Mission: To INSPIRE and EMPOWER others by sharing my passion for health and fitness. FIGHT for what you want in life. Never Give UP And DREAM Big.